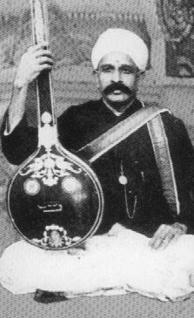 Tyagaraja, the great Carnatic composer spent most of his life in Tanjore district and trained several great musicians until he passed away in 1847. One of them was his cousin Akumalla (Manambuchavadi) Venkatasubbayya. During his lifetime Venkatasubbayya also attracted several students and one of them was Susarla Dakshinamurthy Sastry (1860-1917). Sastry’s devotion to music drove him to walk all the way to Tamilnadu from his native Krishna district. After learning music from Venkatasubbayya, Dakshninamurthy Sastry returned to Andhra Pradesh. Sastry was the first to bring the musical tradition of Tyagaraja to Andhra region and several students benefited from him. One of them was Parupalli Ramakrishnayya (1883-1951) who is known today as the guru of the eminent vocalist Dr. M Balamuralikrishna.

As a young man Ramakrishnayya worked as Thanedar performing magisterial duties at the princely estate of Challapalli. However he was strongly attracted to classical music from his childhood. He approached the great Dakshinamurthy Sastry and was readily accepted as a disciple. The gurukulam set up by Dakshinamurthy Sastry provided his students with adequate boarding and lodging facilities. Ramakrishnayya took lessons in vocal music and violin playing. By his dedication and talent, Ramakrishnayya soon became the favourite student and impressed his contemporaries. He led a disciplined life and followed all the religious rites.

Having lost his wife early, Ramakrishnayya married again and started living in Krishna district working as a village officer and practising music alongside. He began to participate in music festivals and concerts in Andhra Pradesh, Madras, Tanjore and other places. His talent attracted several connoisseurs and he became a regular performer. In 1929 the Saraswati Ganasabha of Kakinada awarded him its gold medal. In 1931, after his performance at Narasaraopet, the Andhra Saraswata Parishad awarded him the title Gayaka Sarvabhauma. Later he received the title Bharatiya Teerthopadhyaya in Poona. Columbia Company cut his discs and he started performing over All India Radio at Madras. He also participated in some of the Experts’ Committee meeting at the Music Academy, Madras.

Later Ramakrishnayya settled down in Vijayawada and trained several students. They include actor-singers like his younger brother Subbarao and Addanki Sriramamurthy, violinists Saride Subbarao, Krishnamacharylu and Annavarapu Ramaswamy, Nadaswara Vidwan Daliparti Pichchahari and several vocalists like Balamuralikrishna, Ramanamurthy. He conducted several music festivals in the name of Tyagaraja and his own guru Dakshinamurthy Sastry. Those days not many classical music concerts were arranged in Andhra Pradesh. Through the efforts of Ramakrishnayya, music lovers of Vijayawada could attend concerts by most of the luminaries of Carnatic music. Soon, a broadcasting station and a music college were started at Vijayawada. Apart from performing and teaching music, Ramakrishnayya made a detailed study of several musical treatises and related literary works. In 1948 he participated in a music festival held in the name of Kshetrayya, the great Telugu poet-laureate of the 17th century.at Madras. He also participated in some of the Experts’ Committee meeting at the Music Academy, Madras.

As befits an employee of the court, Ramakrishnayya’s appearance was both impressive and benign. With vibhuti on his forehead, moustache, turban, black coat and walking stick, his manner was unassuming, kind and soft-spoken. He had paternal affection towards all his disciples, providing them with facilities at his own residence free of cost, rather than make money by letting out the premises. Balamuralikrishna who considers himself fortunate to have learnt music as a five-year old, sitting in the lap of Ramakrishnayya, avers that he was the greatest guru of all time. Ramakrishnayya did everything to give the best to his disciples.

In 1951, even as he was conducting a music festival in memory of his guru, Ramakrishnayya passed away peacefully, leaving behind a galaxy of disciples to carry forward the parampara of Tyagaraja.